GEORGE TOWN: Residents in the Relau neighbourhood in Paya Terubong, Penang, are upset over the noise pollution caused by factory buses.

They said this problem had been going on for more than 10 years with the authorities not taking any remedial measures.

Relau is a mixed neighbourhood, where low-cost flats exist together with expensive properties.

The problem began when some of these low-cost flats were turned into hostels for foreigners working in factories in the Bayan Lepas Free Industrial Zone.

Factory buses often enter the neighbourhood to pick and drop these workers.

At a press conference today at the Sierra East condominium, the Penang Relau Residents Association said the driving habits of these bus drivers also endangered the lives of residents.

“The roads in the neighbourhood are narrow and these buses are too big.

“Some of our residents have experienced close calls with these buses almost hitting their cars at T- junctions,” said Keane Ng, representative of the Penang Relau Residents Association who chaired the session.

He said there was noise pollution when the bus drivers started to park their buses along the roads.

“They start their engines as early at 4am,” said Ng.

Ng said the noise pollution and the hostels for foreign workers had led to a depreciation in the value of their properties.

Ng called on the Association of Companies in Penang Industrial Zone (Frepenca) to resolve the problem by designating special parking depots for the buses that are located far from their neighbourhood. 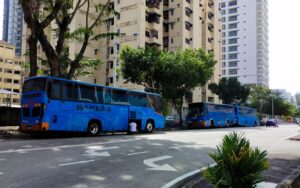 He said Paya Terubong assemblyman Yeoh Soon Hin had promised to find a solution to their woes by introducing road bumps and height gantries.

“We have also raised this matter with chief minister Chow Kon Yeow.”

Back in 2018, The Star reported that the Penang state government had identified two sites in Bayan Lepas as factory bus depots.

Earlier in February, factory bus operators said the lack of such depots had forced them to park in residential areas.